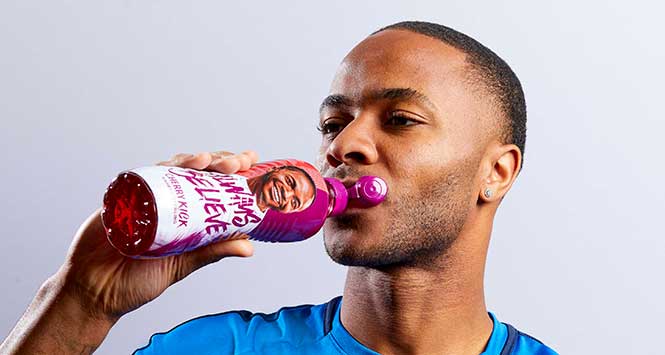 Lucozade Sport has teamed up with England footballer Raheem Sterling as part of a marketing campaign for its new Cherry Kick flavour.

The marketing activity will span three months, kicking off in September and featuring in the run-up to Christmas. It will highlight the importance of keeping hydrated during exercise even during the colder months.

Lucozade Sport Cherry Kick is available now in 500ml standard and PMP bottles as well as a four-pack multipack. The latest addition joined the Sport range in April and packs feature an image of Sterling.

As part of the campaign, Sterling and a range of other Lucozade Sport ambassadors will undertake the Cherry Kick challenge on social media, as the brand bids to build excitement and drive sales.

The Cherry kick challenge is a take on the usual social media bottle challenges, where consumers will be asked to create their own Instagram Reels video, using a bottle of Lucozade Sport to show off their football and/or sporting skills. By sharing their creations with the #CherryKickChallenge hashtag and tagging @LucozadeSportUK they will be in with a chance to win prizes.

The campaign is part of a much wider brand mission to inspire the nation to move more ahead of the UEFA Euro 2021 tournament.