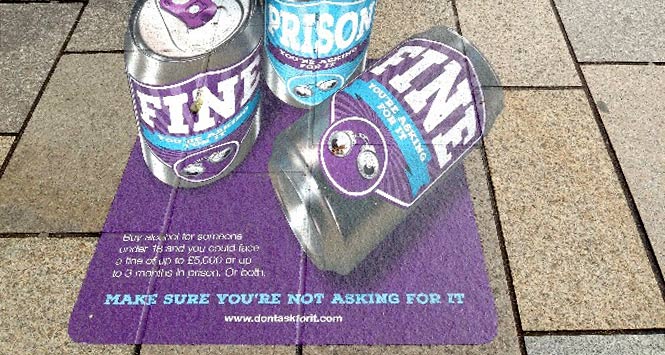 A campaign to reduce the number of adults in North Lanarkshire who buy alcohol for under 18s (proxy purchase) has resulted in 84 offences being detected over a four month period.

The offences included 49 adults in the Motherwell and Wishaw areas being charged with buying alcohol for children and nine premises being reported for selling directly to under 18s.

The campaign, which included pavement graffiti, social media, in-store signage and increased police patrols, has resulted in 23 times as many offences being detected compared to the previous 12 months.

The knock-on effect on local crime figures has been significant:

John Lee, Chair of the SGAIP Campaigns Group, said: “Awareness of proxy purchase – and the consequences – are up. The success of this campaign is clear to see and we will look forward to replicating it in other areas of Scotland in the future.”

Councillor Jim McCabe, Leader of North Lanarkshire Council and Chair of the North Lanarkshire Partnership Board, added: “This campaign has raised awareness among licensed traders of their role in tackling underage drinking. Our partnership approach to this issue has had a positive, practical impact on our communities.”

Learnings and successes from this successful trial will now shape future campaigns across Scotland.