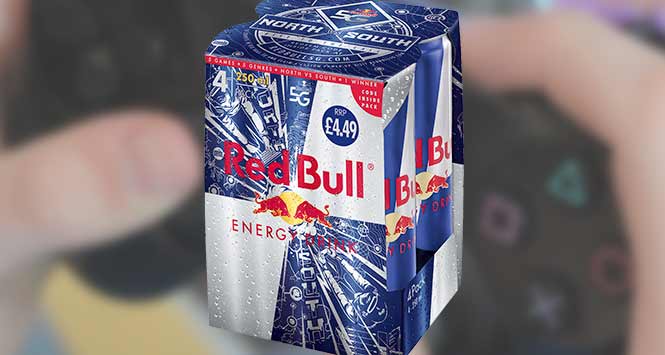 Red Bull 5G gives consumers the chance to demonstrate their button-pressing prowess by playing five different video games – hence the 5G. The finest gamers from the north of the country will take on the best the south has to offer in a national final. The overall winners will receive an all-expenses-paid trip to Japan.

The limited edition four-pack will be across Energy Drink, Sugarfree and £4.49 PMP from August 8th. The messaging on-pack and POS invites consumers to pledge allegiance to their region and battle it out to be crowned the best gamers in the country.

Each pack features a unique code to redeem online, which unlocks exclusive power-ups and in-game add-ons. With 25% of gamers consuming energy drinks whilst gaming, Red Bull says the on-pack promotion creates a “major opportunity” for retailers to engage shoppers.

Gavin Lissimore, Head of Category Marketing at Red Bull, commented: “By offering stand out on shelf linking back to the event, the limited edition packs will open up a major opportunity for retailers to drive rate of sale on Red Bull four-packs and attract its core audience of 18-24 year olds.”