Make it a night to remember 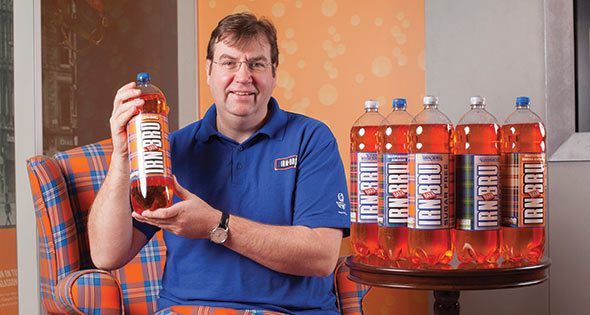 The celebration of the birth of our national bard has grown in stature in recent years, and with consumers seeking out small events to celebrate throughout 2015, staking your case for being the event retailer of choice is vital.

Great chieftain o the puddin’-race it may be, but Burns Night is about more than haggis. One of the main trends of 2015 will be events. On the back of huge events across the UK in 2012 and 2014, consumers are looking for occasions to gather with friends and family. The first of these happens to be Burns night, where haggis, whisky and a host of other products will be in great demand.

If further proof was needed as to the growing importance of Burns on the retail calendar then consider the fact AG Barr is delivering a £1m marketing campaign based around Burns Night.

The new campaign will see 57 different bottle designs hit shelves this as part of a tartan-based ‘Bru’s Your Clan’ campaign.

The initiative will see a range of tartan labelled packs which it is hoped will encourage shoppers to look for their own clan tartan pack, leading to a boost in sales for local retailers in the first eight weeks of the year.

The limited edition packs will be available in 56 clan tartan designs, covering the 100 most popular Scottish surnames. The 57th tartan design will be the orange and blue Irn-Bru tartan allowing shoppers who may not have a clan to still be part of the campaign.

“We really wanted to do this at the start of the New Year,” AG Barr Commerical Director Jonathan Kemp told SLR. “It’ll look fantastic on shelf when you see five or six facings in different tartans. The family will want their tartan around the table, and when Burns Night comes round that will be even more pronounced.”

Kemp said the campaign tapped into trends for personalisation and an increased interest in family trees, made popular by TV programmes such as Who Do You Think You Are?

The campaign is available across two-litre and 500ml bottles, exclusively in Scotland. A two for £2 price marked deal is available on the two-litre bottles, while the 500ml PET bottles are pricemarked at 95p.

Kemp says that with around £1m being spent on the campaign, there will be strong awareness, and for retailers there’s the chance to really boost sales at an otherwise quiet time of the year, especially when you consider that a large proportion of that £1m spend will be going on in-store POS for the convenience channel. “It’s an opportunity for retailers to bring in extra sales at a time when it is difficult to do so,” says Kemp. He also advises retailers to work on making a great Irn-Bru display. “The better the display, the bigger the profits,” he adds.

Much of the marketing for the campaign will come through social media which Kemp said helped drive his marketing strategy. “Social Media is huge for us now,” he says. “We’ll spend double in 2015 what we spent in 2014. If you get on a train in the morning you can see how engaged people are with their mobile devices.”

Kemp advises retailers to stock up as soon as stock becomes available in January. “I’m really excited about Bru’s Your Clan. There’s a natural affinity with the brand – we always try to do something that is unique to us, and this won’t be any different so retailers can expect our usual irreverence.”

Christmas may have only just passed but the limited range of Haggis products launched by Macsween will enjoy popularity through until Burns night. The range, includes Wild Boar Haggis and Macsween Moroccan Spiced Vegetarian Haggis (both retailing at £4.95). A Chocolate and Chilli Black Pudding was also launched by the company and along with the launches Macsween developed a number of original recipes. Again, the use of interactive marketing is becoming more widespread in convenience and recipe cards can help make the difference between a sale or not. With the new Macsween lines, customers could make pastries with a twist or Wild Boar Haggis sliders.

With Christmas and Hogmanay providing a huge boost for whisky sales there’s no reason retailers can’t continue to build on this in the lead up to Burns Night.

“Looking at consumer behaviour we can see a trend developing towards premiumisation within the spirits category which is illustrated by 87% of spirits growth in 2013 coming from premium brands,” says Stephen Watt, UK Off-Trade Sales Director at Whyte & Mackay. “So we would recommend that retailers consider stocking a range of both malt and blended whiskies that cover the varying flavour profiles and price points to give the consumer a great selection to choose from and are also available in fractional sized bottles for those managing a budget.” Whyte & Mackay offers fractionals for both its eponymous brand for its Jura single malt.

A Scottish brew for all

Arran Brewery is hoping to appeal to more women drinkers by offering beer that the brewery claims has fewer calories than wine.

Beers such as Arran Sunset are being pitched with a new angle with Gerald Michaluk, Managing Director of the Arran Brewery, commenting: “Wine is drunk by more than twice as many women than beer and if we are to encourage more females to drink Arran Beers we need to address their misconceptions about beer generally so they can discover just how good the Arran Beers are.”

For retailers, there is considerable benefit in highlighting the calorific content of some alcoholic drinks, and for Burns Night, handpicking a selection of Scottish products will draw interest and provide potential sales growth.