SGF looks to the future at centenary conference 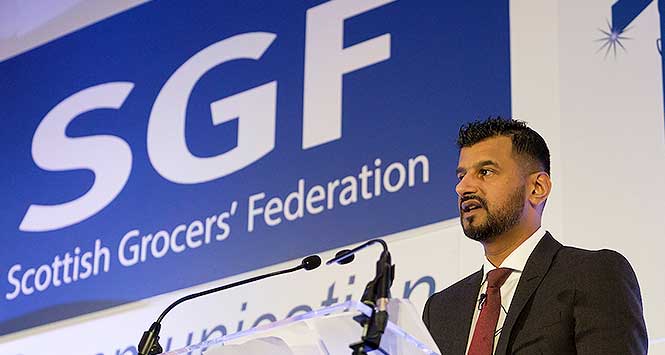 The theme of the centenary Scottish Grocers’ Federation Conference (October 25 – 26) was ‘the dawn of a new era’, and it soon dawned on delegates at the Crowne Plaza in Glasgow that a Deposit Return Scheme (DRS) will be a major factor in the future of convenience retailing in Scotland.

“This is going to happen,” said the SGF’s Head of Policy and Public Affairs and conference Chairman John Lee, launching a seminar on DRS. Lee said the Federation initially had serious concerns on the issue, but had since come a long way. The debate now, he stressed, was about how the industry can make it work.

Callum Blackburn, Head of Policy, Research and Evaluation for Zero Waste Scotland gave an overview of the current state of recycling in Scotland. He revealed that only 50% of drinks containers are currently recycled. This compares poorly to Germany, with its 98% take-back rate. Germans, however, receive 25c for every item returned. Blackburn then outlined various options for what a Scottish DRS scheme might look like in terms of materials recycled, return locations and administration.

He was noncommittal on a timescale for implementation, but the implication was that any legislation won’t come in to force before 2020 at the very earliest.

With DRS still very much at the discussion stage in Scotland, it’s easy to forget the number of countries where schemes already exist. Coca-Cola, for example, is currently involved in 40 of these worldwide. Nick Brown, the soft drinks giant’s GB Head of Sustainability said “now really was the time to engage with DRS” and shared examples of working solutions for stores of all sizes including a manual option for those that can’t justify the cost of a reverse vending machine (RVM).

The installation of an RVM by Scotmid caused a ripple of interest through the industry recently. Norwegian firm Tomra supplied the equipment and the company’s Executive VP Harald Henriksen said that a well-implemented DRS scheme will work in Scotland. He cited Lithuania, which went from a 34% to a 94% return rate in two years.

Henriksen had plenty of other interesting nuggets of information to offer, like the different incentives offered by schemes to encourage recycling. Norwegians, for example, can choose to get an entry into a £100,000 prize draw for every bottle returned.

The speakers were then joined by SGF Chief Executive Pete Cheema, Scotmid’s Head of Format and Store Development Nick Brown and Tomra boss Truls Haug for an engaging panel discussion.

Gordon gave some initial findings from Scotmid’s three-month-long RVM trial. The machine, located in Scotmid’s South Queensferry store, has processed around 1,000 bottles and cans in its first week of operation. It dispenses vouchers which can be used in-store. There has been an 87% redemption rate so far.

There was a consensus from the panel that Scotland’s DRS scheme should be administered by retailers and suppliers. Coke’s Brown said it was vital that it should be run on a not-for-profit basis.

The opening day was rounded off with four well-attended breakout sessions from AGL Wealth Management, Camelot, Envipco and Whyte & Mackay before a black-tie dinner in the evening.

This marked the end of Dennis Williams’ two-year stint as SGF President, and he duly passed the baton to Asim Sarwar (pictured), boss of United Wholesale Scotland.

New President Sarwar was first to speak the following morning and said his tenure would have a clear focus on symbol groups and their relationship with retailers, challenging the latter to “get involved”.

Kathryn Neil of the SGF’s Healthy Living Programme (HLP) was then joined on stage by Claire Hislop from NHS Health Scotland. The pair talked about a shake-up of the HLP in the New Year and discussed forthcoming legislation on foods high in fat, salt and sugar. Neil called on symbol groups to build on the success of the Big Breakfast programme.

JW Filshill boss Simon Hannah set his sights firmly on ‘the day after tomorrow’ with a rapid-fire discourse on the need for forward planning, citing Kodak as a prime example of a business that didn’t adapt to changing markets. He then reminded the audience that ultimately there is only one boss – the customer. “He can fire everyone in the company by simply spending his money elsewhere,” warned Hannah.

Hannah was followed by Team GB curler Greg Drummond. Interviewed by day two conference chair Graham Meare, Drummond revealed how lottery funding enabled him to train and compete full-time and ultimately led to him winning a silver medal at the Sochi Winter Olympics in 2014.

With obesity rates and the national diet high on everyone’s agenda, Allan Miller – Commercial Director of Paterson Arran – voiced concerns that the healthy eating debate is being framed in terms more suited to tobacco and alcohol. He made his point in a light-hearted manner by highlighting the implied risks of passive biscuit consumption. “If I eat shortbread you will not get fat,” he said.

After an entertaining talk on the history of Golden Casket from the company’s manufacturing MD and Greenock Morton chairman Crawford Rae, AG Barr’s Ian Johnstone took to the stage to talk about Fanny, his office goldfish. Comparing the world of local retail to a fish tank, Barr’s Impulse Sales Controller for Scotland make some interesting points on the importance of relationships and of staying relevant. He urged retailers to work with suppliers for their mutual benefit and said that “NPD is the lifeblood of the convenience sector”.

In her keynote speech First Minister Nicola Sturgeon announced an extension of the Food-to-go fund, which will receive an additional £300,000 in 2019 to help retailers install food-to-go stations in their stores.

However new criteria aligned to the funding means that successful applicants will also have to undertake a commitment to reduce food and packaging waste.

Sturgeon said: “A diverse and successful convenience store sector is vital in serving communities throughout Scotland. Last year’s Food to Go fund was very effective in supporting small retailers the length and breadth of the country to entice customers into their stores and generate a new income stream for grocers.

“This new funding will build on that, helping grocers to provide people with access to good quality, locally sourced and healthy food as well as providing an important focus on waste reduction.”

The First Minister also paid tribute to the Federation, praising its “invaluable contribution” to the economy and society over the last 100 years. She also pledged that the Scottish Government would continue to work in partnership with retailers and listen to their concerns over any measures to restrict promotion of foods high in fat, salt and sugar.

Speaking after the First Minister, News Scotland boss Richard Bogie brought the conference to a close with a bullish talk on the future of the newstrade, which he described as “rosy” despite the challenges traditional publishers face from social media platforms.