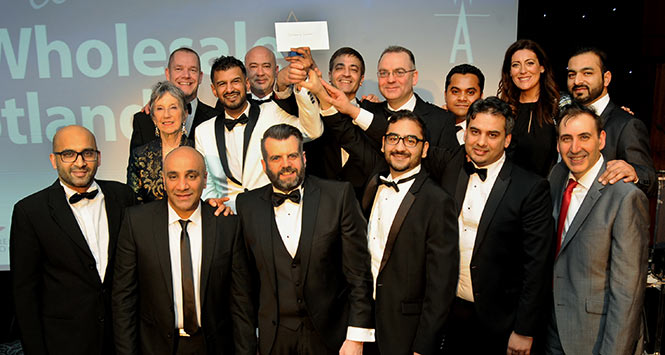 It was a glittering night for United, who also triumphed in the Employee of the Year category, sponsored by Britvic Soft Drinks, with the wholesaler’s fresh food specialist, Jason McLeod, picking up the trophy. The company also took Best Licensed Operation, sponsored by Halewood International; Best Marketing Initiative, sponsored by AB Barr, for its initiative to advertise and promote its revamped Grangemouth M9 Cash & Carry; and Best Symbol Group, sponsored by Lucozade Ribena Suntory, for Day-Today.

The individual award for Supplier Sales Executive of the Year award, sponsored by Sugro, went to Fiona Nisbet, national accounts executive at Mars Chocolate, who impressed the independent judging panel with her ability “to get the best outcome for her wholesale customers and employer”. The Project Scotland award, which highlights suppliers’ understanding and commitment to the sector, was won by AG Barr for its relaunch of Irn-Bru with a new design to differentiate the sugar-free version from the original. Best Advertising Campaign saw The Famous Grouse ‘Full of Character’ coming out on top, seeing off imaginative competition from Aunt Bessie’s ‘I’m a Celebrity’; Haribo ‘Kids’ Voices – Platform’; and Tennent’s ‘T5s’ – who’s “goalkeeper fails” advert had the 500-strong audience at the event rolling in the aisles.

Kate Salmon, SWA executive director was pleased overall with another successful staging of Achievers. “Fairness is paramount to Achievers and although our awards have evolved over the years, what has remained consistent is our integrity – our uncompromising standards and high values across all aspects of the competition and we will continue to build on this in partnership with entrants, supplier sponsors and independent judges.”

The SWA anticipates welcoming all the Achievers awards winners to its annual conference, to be held at the Crieff Hydro in Perthshire from 9-11 June.