SGF gears up for Holyrood election 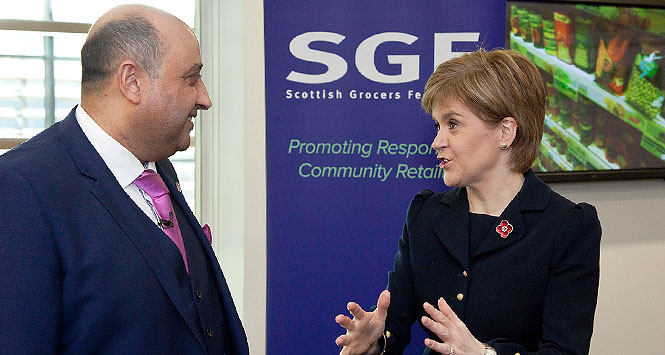 SGF will launch its manifesto for the 2016 Scottish parliament election at its ‘Big Debate’ event on 14th April.

SGF has taken a no-nonsense approach to spelling out the key issues facing the convenience store industry and lists what the most effective solutions are. The document is targeted at the MSPs who will be in Holyrood after 5th May.

Key issues addressed in the manifesto include the negative impact on retailers of a potential Deposit Return System, the need for a government Minister to take direct responsibility for the illicit trade and the benefits of having a Cross Party Group in the Scottish Parliament on independent convenience stores. Also – and driven by some of the shocking figures on in-store crime revealed by SGF’s recent retail crime report – the Federation is calling for staff in convenience stores to be given the same legal protection as emergency workers.

SGF Chief Executive Pete Cheema (pictured with First Minister Nicola Sturgeon) said: “We have made this a very focused, very practical document – we believe that all of the solutions to the problems we’ve highlighted can be achieved by MSPs in the next parliament. We will look to build a cross party consensus on tacking the issues affecting our industry.”

A key example of the consensus building Cheema thinks is required is to ensure that the small business bonus becomes a permanent form of relief within the business rates system – a proposal in the manifesto that SGF is calling on every party to support.

The launch of the manifesto is the next step in a programme of political engagement that began in January with the parliamentary launch of the Scottish Local Shop Report (every MSP now has a copy), a parliamentary debate on the convenience store industry and the Big Debate event itself, which includes Deputy First Minister John Swinney on the panel.