Local retail goes to the top of the political agenda! 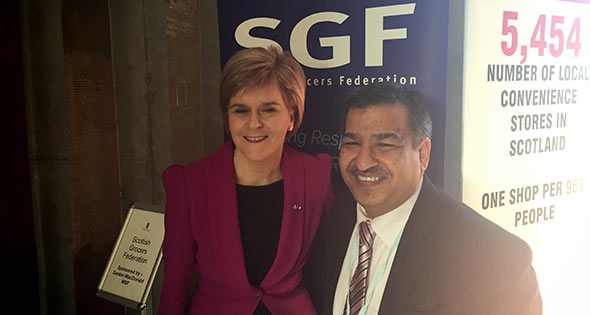 After working diligently throughout 2014 to raise awareness of the local retailing sector among Scotland’s politicians, the SGF got off to a flyer this year with a three-day parliamentary exhibition, which was co-hosted by SLR. Over a three day period in early January the SGF and SLR teamed up to host the exhibition, highlighting the role that local convenience stores play in their communities, both in terms of engagement, and in economic terms.

In the end, over 80 Members of the Scottish Parliament stopped by the exhibition, and there was a genuine desire to stand up for small local stores in the face of increasingly aggressive moves by supermarkets and the discounters.

It wasn’t just constituency and regional MSPs who were keen to discuss the matter either; the most senior members of Government in Scotland stopped by, including First Minister Nicola Sturgeon, her predecessor Alex Salmond, and Scottish Labour leader Jim Murphy.

Held in the Member’s Lobby at Holyrood, ‘The Contribution of Independent Convenience Stores to Scotland’s Communities’ exhibition, over the course of the three days a number of leading retailers in Scotland manned the stand, ably assisted by the SGF’s Public Affairs Manager, John Lee.

SLR’s Kevin Scott, who helped man the stand on its final day, says: “The reaction from the members was hugely positive. To have over 80 MSPs take time out of their schedules to learn more about the role their local store plays in their community was heartening to witness. Many that I spoke to were on first name terms with their own retailers, while we were surprised at how many MSPs actually had a background in convenience retailing! A special mention must go to Abdul Majid, President of the SGF and John Lee, who worked tirelessly to ensure this exhibition took place. Their members should be delighted with the effort they have gone to.”