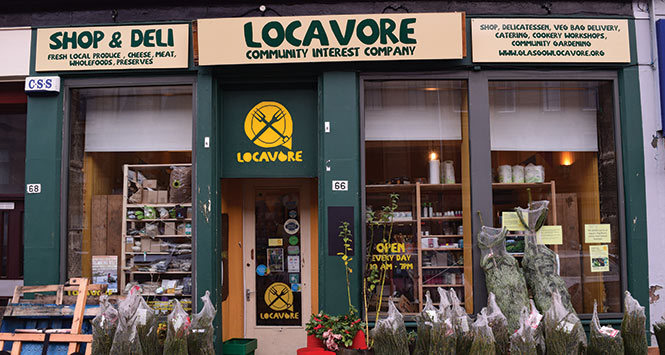 As shoppers become more passionate about what they eat and where it comes from, Locavore, an ethical grocery business in Glasgow’s southside, is aiming to raise £200,000 to open a social enterprise supermarket that would give shoppers the ultimate in locally-sourced retailing.

Locavore was established in December 2011 by four people with the clear aim of promoting local food growing and cookery while running a community shop. In May 2012 the company opened a project hub in Shawlands in the south of Glasgow and ran a local food shop and community cooking workshops. During that period, Locavore created seven new food growing spaces in the community, including train station gardens at Pollokshields West and Pollokshaws East. After a year of growth, Locavore relocated to its current location on Nithsdale Road. Today, it is on course to raise £200,000 partly through a crowd-funded initiative to launch a 1,000 sq m social enterprise supermarket in Glasgow.

Reuben Chesters, Locavore’s Managing Director, says the aim of the company is to use the business “as a vehicle for social good”, as opposed to for profit, a philosophy much in line with the community retailing seen in c-stores throughout Scotland. According to this year’s ACS Local Shop Report, 83% of UK c-store retailers have been involved in community activities like collecting for charity, sponsoring local teams and providing support for local events over the last year, and Locavore is no different. The social enterprise runs a host of community projects, including cookery classes, and – incredibly – an urban croft site in Queens Park that has growing spaces for the local community.

Locavore also takes part in The Good Food Fund (GFF), which runs out of the shop every other Monday, using cash donations from customers to distribute local organic produce and store-cupboard staples at cost price, to 25 people per week. Reuben says: “We value this quite a lot as it makes a difference without too much effort on our part.” Locavore got involved in the scheme after being dissatisfied with supermarkets who charge foodbanks for food and essentials. Reuben says supermarkets should “have more responsibility and give the products to foodbanks themselves.”

Reuben believes that convenience stores could use some elements of Locavore’s business model and “make it work for them.” The shop has even previously tried to collaborate with symbol groups, but it turned out to be too restrictive, due to store purchasing requirements. “It is an entirely different market,” says Reuban. “For instance, we would never sell big global brands like Coca-Cola. I think c-stores could do a lot more to differentiate themselves from supermarkets. This is one way of achieving that. It is a lot harder to run a convenience store than what we’re doing,” Reuben explains.

Knowing its customers plays a huge role in Locavore’s success. The shop carries out occasional customer research via Facebook, and surveys in its newsletter. Data is crucial to the business. What Locavore knows from its research is that the average customer is female, aged 25-34, living in a household with two to three people. Reuben says the shop gets a lot of older customers as well, and most of them are conscious of ethics. Interestingly, the research revealed that 30% of Locavore’s customers do most of their shopping there, and the rest get what they can from Locavore and then go somewhere else depending on cost and what Locavore has to offer that week. This 70% majority split their shopping across Locavore, supermarkets, and another independent retailers. All this information helps the store hone its offer.

“Most people who come in are flexible shoppers – they will see what we have and go home and cook it. People who come in with a list don’t really do as well at finding what they need but you can do a weekly shop at Locavore if you really want,” says Reuben.

While Reuben believes that what Locavore does is “very foreign compared to your average Spar or Nisa”, there are some elements that could be used by c-stores if they want to tap into this market. For instance, cleaning products like Bio-D sell particularly well at Locavore, as customers can bring the bottle back and Locavore will refill them with the product which is a saving of 50p-£1. This refill initiative would be simple enough to recreate in a c–store, space permitting.

Eggs are Locavore’s biggest seller. Priced at £2.30 per half dozen, they are in line with the average supermarket price for organic eggs, but if shoppers bring their own box, this is reduced to £1.80. Taking provenance to levels Tesco could only dream of, Locavore gets eggs from its own hens, and due to the fact they sell over a thousand eggs a week, they have to order in extra from other suppliers. In terms of replicating this model in convenience stores Reuben says it depends on the location. “It could be part of an added expense but might be a good idea to get eggs from local farms instead of wholesalers,” he says.

He puts the increased basket spend down to Locavore’s dedication to increasing its lines and focusing on essentials. The shop didn’t sell tinned tomatoes, its second biggest seller (after eggs) a year ago, for example. The shop has limited space so there can’t be a full aisle of tinned food but Reuben says he tries to have a good selection of everything.

Locavore delivers about 200 boxes of groceries in its weekly vegbox delivery scheme. Customers can receive eggs/milk or any groceries every Friday. This links in with the shop’s market garden, eight miles away from the shop, in Neilston, where the group grows produce it can’t source locally. “Customers like it because it is extra fresh,” says Reuben. The majority of supermarkets can’t offer next day delivery but c-stores are in a unique position where they are able to react quickly to customer requests.

The proof of the store’s success is in the numbers. This isn’t a loss-making operation more focused on ethics than profits. What Locavore does is prove that you can run an ethical, profitable business that’s good for the planet and the local community. The average basket price is £10 – nearly double what it was a year ago (£5.50-£6) – and higher than the c-store average of £6.52, impressive considering the directors of Locavore don’t have a retail background. “We formed in quite a haphazard way and learned as we went along. We have made plenty of mistakes but you learn from them,” says Reuben.

In November 2015, Locavore launched its ‘Big Plan’, a crowd-fund initiative to launch a social enterprise supermarket in Glasgow that, at 1,000 sq m would be roughly the size of a standard Lidl shop, and 20 times the size of Locavore’s current premises. “The aim is to act like an independent supermarket but with ethics behind it, changing the world one shopping basket at a time. If we are a larger part of the market, we can strive to change that market,” says Rueben.

The social enterprise aims to raise at least £200,000 through crowd funding, loan stock and social lending to launch their larger store. At the time of writing the company had already secured £17,500 from LaunchMe, a social enterprise accelerator programme run by Firstport and £16,000 through Crowdfunder – passing a preliminary goal of £15,000 by mid-December. As an incentive for people to donate, Locavore has offered a range of rewards depending on the amount donated, including discount coupons, allotment plots, cooking workshops, veg box deliveries and even the chance to name a supermarket aisle.

Reuben and his team have visited similar retail models of comparative scale around the world, spending a week at the UK’s largest co-operative retailer, the Unicorn Grocery in Manchester, where they were given access to everything from set-up costs and systems to finance and IT. Unicorn generates sales of over £6m a year and has 60-70 full time staff.

Reuben concldues: “I live in a bubble where this stuff is all I hear about but I think there is a cultural shift. People like what we do for different reasons; our health, environment, political statements, or just that our food is better. For a small business we are as far ahead as anyone else in Scotland.”

Locavore isn’t the only company focusing on ethically sourced local produce. There are a number of stores in Glasgow, and around Scotland that do just that – elements of which can be replicated in c-stores to improve their standing in the community, and offer a real point of difference to supermarkets.

Grassroots
A 70% organic wholefoods supermarket, deli and café in Glasgow’s West End that claims to have the widest selection of organic wine in Scotland.

Heart Buchanan
A deli on Byres Road that contains a range of Scottish products, including locally sourced salmon and wild boar sausage.

Lupe Pintos
This store specialises in spicy and Mexican food with 40 different types of chilli and is famous for the chipotle chilli – a dried and smoked jalapeno pepper shipped in from Mexico. It also stocks cooked Meara, olive oils, tea, coffee, grocery products and organic food.

Roots, Fruits & Flowers
Located near Glasgow’s Kelvinbridge, this store is a community based grocery store for the environmentally conscious with a varied selection of organic meat, dairy products and fruit and vegetables.

Greencity Wholefoods
A wholesaler of food and wine based in Glasgow’s east end. The shop does not sell any products tested on animals and only sells vegetarian groceries.