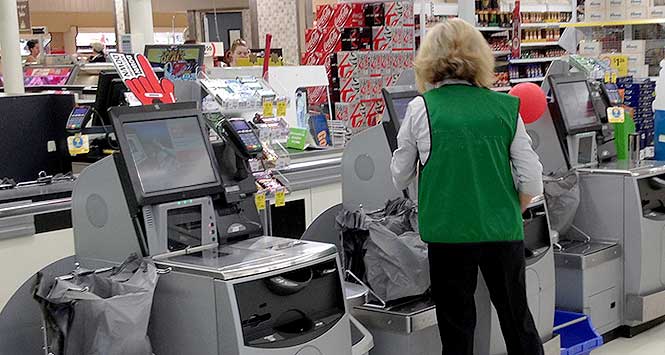 One in four Scottish self-checkout customers have stolen groceries, according to a new study.

So-called “swipers” use a variety of tricks like swapping the barcodes of high-value items with cheaper products or deliberately pretending expensive fruit and vegetables are cheaper items, like carrots.

Almost half (46%) of the thieves admit to doing it on a regular basis and Scots swipers are estimated to steal an average of £350-worth of goods every year. The annual cost of £14m gets passed on to consumers.

Stores with self-checkouts lose nearly 4% of stock compared to around 1.5% for staffed tills.

Dave Williams of shopworkers union Usdaw thinks stores should invest in staff instead: “We suggest retailers think very carefully about the knock-on impact to their business of reducing staffing levels through the introduction of new technology.”

Dr Emmeline Taylor, a criminologist and expert in retail crime at City University, London, said shops still feel it is the correct choice: “They save more money on not having staff than they lose on swipers.”

Taylor said many people start “swiping” accidentally, but then see how easy it is and then it becomes a regular habit.

“Often they don’t see it as stealing because they’re interacting with a machine.”

She said a lot of retailers were ignoring the problem for fear of wrongfully accusing customers.

“The damage to the relationship between shopper and store is so significant, so a lot of retailers will turn a blind eye to it.”

Maxine Fraser, boss of Stirling-based Retailers Against Crime, as no sympathy for light-fingered shoppers: “We can come up with psychological reasons why people do it – but a thief is a thief.

“Our members all have CCTV. People who are stealing from checkouts may think they’ve gotten away with it, but they may already be noted somewhere as a person to watch.

“If you’ve been stealing via a self-service checkout, you may already be on a blacklist without knowing it.”

It appears that the problem gets even worse when the till is removed from the equation, as in the case of the American chain Walmart’s Scan & Go mobile app.

“You think that the theft is bad on self-checkouts? Wait until you try Scan & Go, where nobody is watching the customers out in the aisles,” said Joel Larson, a former Walmart executive, speaking to Business Insider.

Larson recalled a colleague saying “we’re just going to call the programme ‘go’ because the customers can’t seem to ‘scan’ anything.”