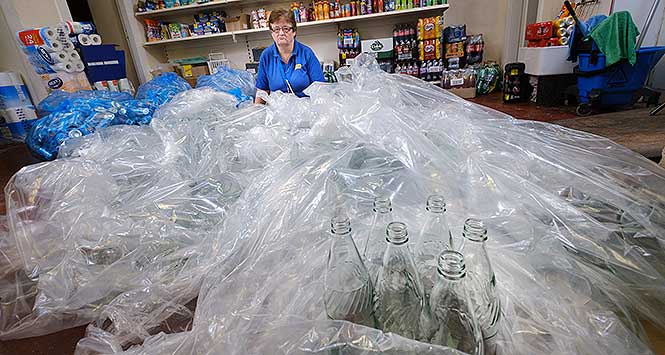 The Scottish Grocers’ Federation has renewed calls for glass to be excluded from Scotland’s forthcoming Deposit Return Scheme (DRS) following an in-store trial.

Staff at the Keystore-Clydebank Co-op in Knightswood, Glasgow collected and bagged up 300 glass bottles, alongside the same number of aluminium cans and PET drinks containers.

As the picture shows, the store’s back shop was covered with 18 clear refuse sacks containing bottles; the cans and plastic containers were placed in same-sized blue sacks. These fitted into only three sacks each, taking up one-sixth of the space that glass did – and that was without any compacting.

On the shop floor, the presence of only a few sacks behind the till soon hampered staff as they tried to serve customers.

Staff also voiced concerns about the weight of the bags and the extremely loud noise they made when being moved. The danger posed by glass was also exposed when a sack was accidentally dropped during the trial, breaking one of the bottles inside it.

The store is supplied by wholesaler JW Filshill. The company’s Retail Sales Director Craig Brown said the average Keystore’s back shop was just one-fifth the size of Clydebank Co-op’s.

Brown would like to see a phased roll out for DRS: “I think glass would be too much of a challenge initially. If we process plastic and aluminium to start with, do it really well and have a really slick system, we can then start to move glass into it further down the line.”

SGF’s Head of Policy and Public Affairs John Lee took a firmer stance: “The Scottish Parliament must say no to glass. Retailers want to make this work: convenience stores are flexible enough to adapt to PET and cans, but glass is a step too far.

“Frankly given the lack of space in modern convenience stores and the growing number of stores who offer food, having customers return glass to stores is simply wrong.”

Draft regulations for the proposed scheme are currently open to public consultation. Interested parties may comment at bit.ly/2kut9b6 before the consultation closes on 10 December 2019.

A parliamentary scrutiny process will also get underway. The legislative process is intended to be complete by February 2020 with the scheme going live in April 2021.