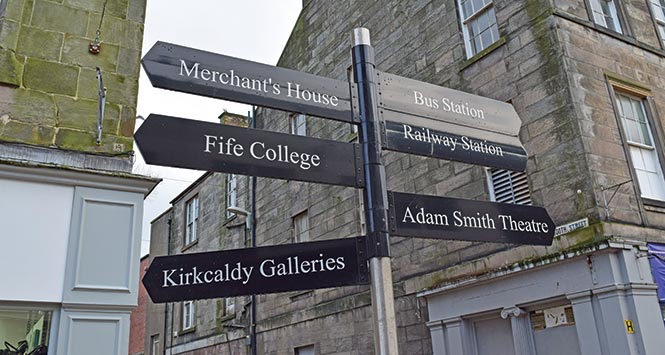 In Kirkcaldy, the town centre has benefitted over the last five years from a BID (Business Improvement District) levy paid for by local businesses. In an age where Scotland’s towns, and small businesses are struggling, Kirkcaldy’s success illustrates the power of collaboration.

The decline of the high street is a recurring theme in the narrative of 21st century retail. Whether it’s online powerhouses like Amazon, or out of town developments, the net result has been scores of high streets across Scotland emptied. Vacant sites have dusty ‘closing down’ posters in the windows, pedestrianised spaces are empty: it’s a grim picture, but Kirkcaldy is proving that it doesn’t have to be.

The Fife town has a familiar background – pits, heavy industry, a prosperous economy until the 80s and Thatcherism and the inevitable decline into the doldrums.

“There was no investment for decades, there were no jobs being created and it became one of the most depressed towns in the UK,” says Bill Harvie, BID Manager for Kirkcaldy 4 All – and the man who has helped bring life back to the high street.

A former Navy man, Bill took on the role in 2010 after the town centre’s businesses established what’s known as a Business Improvement District.

BIDs first emerged in Toronto, Canada almost 40 years ago, when local businesses in the Bloor West Village took collective action against the growth of shopping malls. The group lobbied for legislation that made all businesses liable for a levy, then used that money to improve the appearance of the town and encourage new shops to open.

It was a resounding success and BID legislation was introduced in Scotland in 2006, with six pilot schemes. Today there are 28 schemes in the country, and over 20 in development. For local retailers in areas that have been decimated by out of town developments, the transformation of Kirkcaldy is a beacon of hope. That’s not to say the town has become a utopia of thriving independent family businesses – there are as many high street names as there are small stores, but the fact that Marks & Spencer, Next, Waterstones and the likes are still trading provides hope. And next to them are those family businesses.

There are four main spokes to the Kirkcaldy 4 All action plan, which has nine local shops represented on its committee. These aims are:

Harvie describes that action plan using an analogy from his days in the Navy. “In the submarine world, we had a tactic called ‘Granny’s Footsteps’. If you were being followed you would maintain your course, altering it in tiny increments. Your course would then alter and you could become the aggressor before the enemy even noticed.”

There have been lots of little changes in Kirkcaldy, none of which have been transformative, but collectively they have breathed new life into the town and made it a viable site for independent businesses to flourish.

“There are lots of benefits for members, from getting Christmas lights, to getting bird mess cleared up to hanging baskets along the high street,” sales Harvie. 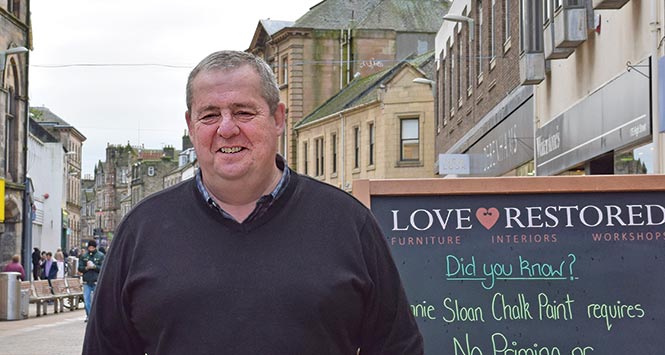 In those first five years a huge number of events were held to drive visitors to the town. Thanks to a Beach Motorcycle race, the Scottish Beach Highland Games, the Fife International Carnival, the Adam Smith food festival, the televised Halfords Tour Series cycling event, and a huge array of smaller events, thousands upon thousands of people visited the town.

“The events have been a huge success,” says local MSP David Torrance. “They bring people into the town who maybe haven’t been for a long while. They might only be coming for the day but they see the shops, what’s available, and it might make them visit again, so they’re a great advert for what Kirkcaldy can offer.”

The list of work being carried out by the BID seems endless. One current scheme is a pilot that sees car parking in the town centre halved in price for six months. Running until 31st March, Harvie is confident that positive results force the council into making the move permanent.

A social media service has been up and running since summer 2014, which sees a ‘brand maker’ visit every store in the BID area every week and capturing information on what each store is up to. This is passed onto a PR team which puts relevant and engaging copy out on social media.

Harvie says the success of the scheme is in part down to the attitude of business owners and locals who simply refused to let their town centre wither. “It’s quite a parochial place, there’s a siege mentality almost,” he says. “Which I suppose has actually been a positive thing!”

Harvie says one of the priorities for the town is to lobby for a chance in business rates. “They’ve not changed since 2010 in there’s been a recession since then; belts are still tight. Shops are seeing turnover go down but rates go up. The legislation is not fit for purpose.”

He highlights how towns are up against it when town centre sites pay a higher percentage of rates than out of town stores – rightly questioning what good that can possibly do town centres.

“It’s easy enough to fix. Parties change their minds on policy constantly when it suits them, so why not change business rates – increase out of town rates, reduce town centre rates so there’s a balance that is fair for all.”

Harvie says that while the Government needs to help small business, they also need to help themselves – this is demonstrated in Kirkcaldy. “There are always businesses who don’t invest in their business and always have someone else to blame. The businesses who adapt are the ones that succeed. Too many businesses say ‘this is what I sell’ when they should be asking ‘what do you want to buy?’”