SGF Conference focuses on ‘next generation’ 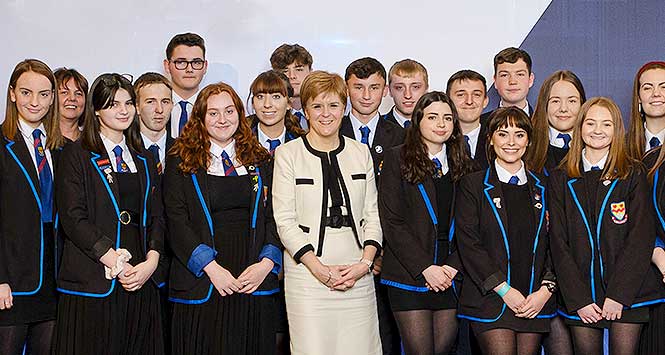 The SGF Conference 2019 saw a packed audience gather in Glasgow to consider this year’s ‘next generation’ theme as the sector gears up for what promises to be a busy and challenging 2020.

Last month’s Scottish Grocers’ Federation (SGF) Annual Conference saw the annual event grow once more as the Federation continues its rebirth, bringing the industry closer together than it has arguably been for many years. Chief Executive Pete Cheema launched the conference, held at Glasgow’s Crowne Plaza hotel on 24 and 25 October 2019, under the theme of ‘next generation’. He opened the event by telling the audience that “what is extraordinary today will be ordinary in 10 years’ time” and urged retailers to “challenge yourselves for today and strive for tomorrow”.

That set the scene for a busy and often challenging two days of presentations, workshops, exhibition, dinners and networking opportunities as the industry prepares for a 2020 that is certain to include its fair share of challenges.

The conference’s opening session kicked off in robust style with an in-depth examination of the forthcoming and highly controversial Deposit Return Scheme (DRS). Session chair Antony Begley of SLR magazine described DRS as “probably one of the biggest changes to affect the convenience sector in living memory”.

The prospect of glass being included in the legislation adds another layer of complexity to an already dense topic for retailers.

Truls Haug, Managing Director of reverse vending machine (RVM) manufacturer TOMRA Collection UK, pointed out the benefits an RVM offers over a manual takeback system. He said a machine would increase footfall, reduce handling time and – thanks to compaction – cut down on storage space for returned bottles and cans. He also highlighted the larger handling fee (3.1p vs. 1.5p per item) that RVMs will attract.

Haug added that there were benefits for customers too, who found the machines “fast and easy” to use.

The other big player in the Scottish RVM market is Envipco UK. Managing Director Spencer Roberts reassured retailers worried about taking back large numbers of bottles they hadn’t sold. “You can’t be out of pocket,” he said, adding that unclaimed deposits will fund the scheme’s administration. 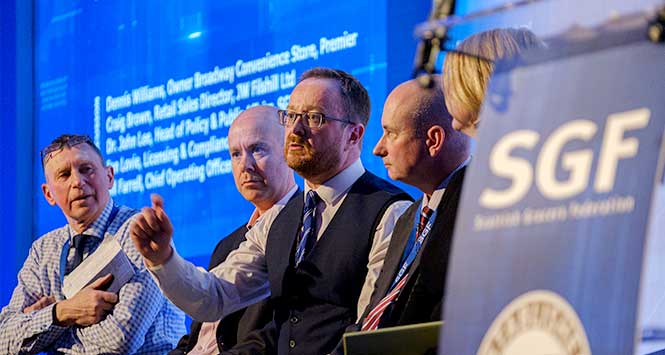 He called on retailers to prepare for the April 2021 launch of DRS, suggesting they use a figure of 90% of their sales volume as a rough indicator to what they might expect to collect.

In what could perhaps best be described as a lively panel discussion, Ian Lovie – Licensing and Compliance Manager for Scotmid – shared his learnings from a year-long trial of a TOMRA machine in Scotmid’s South Queensferry store. This was “a largely positive experience” he said, although he admitted the machine had be cleaned regularly and had a few issues with wasps. With previous experience of manually handling empty glass bottles, Lovie said a machine was his preferred option.

Retailer Dennis Williams, owner of the Premier Broadway store in Edinburgh, has also trialled an RVM, raising £1,700 for local charities in the process. Dennis said the store saw additional footfall during the trial.

Based on the results of a recent manual handling experiment, Craig Brown, Retail Sales Director for JW Filshill, said glass was “18 times less efficient” for retailers compared to plastic and aluminium.

Dennis agreed, saying that weight was a particular concern. He was worried members of staff might struggle with bags that stronger colleagues could comfortably handle.

Brown also highlighted the serious cashflow impact of DRS – Filshill will have to find somewhere between an additional £1m to £1.6m on day one of the scheme.

There are already issues around multipacks, Brown added, using the example of an 18-pack of Irn-Bru that KeyStore has on sale for £5. DRS will push the price of this up by 20p per can to a total pack price of a staggering £8.60. This might drive consumers back towards 3-litre bottles and could potentially “totally change the landscape of convenience stores.”

When asked if it would be possible to postpone the inclusion of glass in the DRS to allow the infrastructure to deal with it to be put in place, Jill Farrell, Chief Operating Officer for Zero Waste Scotland, said the cost of retrofitting would be more expensive that including it from the outset. She also said current models, that see recycling rates of 60%, aren’t good enough.

SGF’s Head of Policy and Public Affairs John Lee said Scotland could have a world-leading DRS if the system was built around local retailers rather than supermarkets due to the sector’s ability to connect with local communities. He said convenience stores were in a unique position to grab the next generation of consumers, the generation most concerned about the environment.

Based on the evidence of the several trials conducted in Scotland to date, Lee said a machine-based solution was best for local retailers. “If you were trying to come up with something to destroy the business model of a convenience store, it would probably be manual take-back,” he concluded. 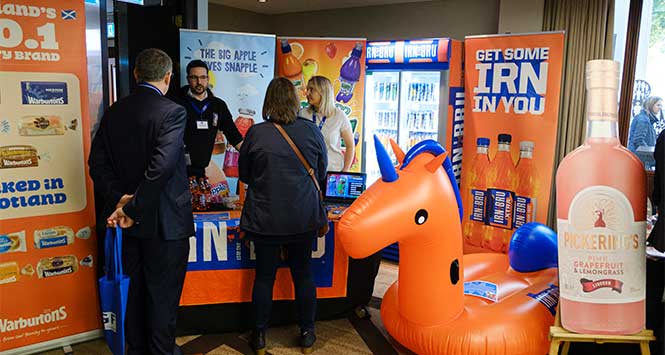 The day’s sessions concluded, the focus shifted to the annual dinner hosted by comedian Des Clarke. The lively evening included a raffle that raised over £2,500 for the SGF Benevolent Fund and gave attendees the opportunity to let their hair down.

Bright and breezy the next day the business sessions recommenced under the chairmanship of CJ Lang’s Jamie Buchanan.

Mike Watkins, Head of Retailer & Business Insight at Nielsen, kicked proceedings off with a fast-paced, insight-packed rattle through the latest trends in convenience retailing before Scott Cooper, Sales Director at Tayto, offered a look inside the business and in particular the Golden Wonder brand that has a starting affinity with Scotland.

Trystan Farnworth, Sustainability Director at Britvic, then offered details of his company’s huge commitment to sustainability issues and how he believes this will impact upon both retailers and consumers in the near future.

Steve Leach, Sales Director at Nisa Retail then delivered a presentation on how Nisa is tackling the ‘next generation’ challenge before United Wholesale Scotland MD Chris Gallacher gave attendees a fascinating view inside the company’s ‘depot of the future’ – a highly tech-enabled depot that is redefining what a cash and carry looks like these days.

Jenny Blogg, Retail Director of Camelot UK, then looked back at the first 25 years of the National Lottery under Camelot, and a look forward to the future. Michael McDougall, Licensing Solicitor at TLT concluded the morning session with a look at the impacts so far of Minimum Unit Pricing.

The star turn, of course, was First Minister Nicola Sturgeon who reaffirmed her Government’s commitment to the Scottish local retailing sector. She also took many of the audience by surprise by announcing that business rates would not be levied on DRS machines, a welcome announcement for all in attendance.

The Conference is regaining much of the lustre of its former years and, judging by the attendance, more retailers than ever have positively re-engaged with SGF, which can only be a good thing for this vital sector.

Celebrating 25 years of running The National Lottery, the Camelot team thanked retailers for helping to raise £40bn for good causes. The lottery operator has been running ‘Operation Child’, which – as you might have guessed from the name – is an under-16 test purchase scheme. Scotland is ahead of the national curve in this respect, with a 91.7% pass rate. The Lottery’s new ‘Dream Big, Play Small’ campaign that looks to get “lots of people playing a little, rather than a few playing a lot” was also discussed, as was the Lottery’s forthcoming 25th birthday celebrations. With a £5.5m media spend for the event, retailers were advised to be on the lookout for new POS material. Mention was also made of a £15m must-be-won Christmas Day jackpot, a “great opportunity” for c-stores given that the mults will be shut.

Catax is a specialist firm that finds qualifying tax claims in businesses and is on target to save its customers £5m in 2019. It’s not a tax avoidance scheme, as the company’s Richard Armstrong was at pains to point out. He said HMRC has £1.9bn to give back to business, as every one of these pounds then generates a further £2.30 in revenues. Tax relief can be claimed for research and development costs – money spent on a new project, product or process. A somewhat pleased Asim Sarwar was on hand to say United Wholesale Scotland got £381,000 spent on a new bespoke IT system back. Limited companies can claim for the current tax year and the two years before that. Armstrong said the process was “too niche” for most accountants and that clients claimed back an average of £56,000 “for three hours of your time”.

Envipco’s breakout session took a quickfire question-and-answer format, with Spencer Roberts fielding retailers’ queries. Is an RVM better sited inside or outside a store? Roberts said there was no right or wrong answer. It’s all about customer flow, he said, adding that people might just use the RVM then go away again if it was outside. When asked about the working capital impact, he said it would take 30 days for retailers to get reimbursed by the scheme’s administrator; he urged retailers to engage with the consultation process and ask for weekly payments. He also addressed hygiene concerns, saying machines were designed to be easily cleaned while freely admitting their conveyor belts needed regular attention. Roberts said it was unlikely retailers would need to buy an RVM, and that handling fees should cover the cost of leasing.

The Healthy Hemp Company is a “seed to sale” business that markets a range of products containing CBD, a compound extracted from cannabis plants that doesn’t get you high but is thought by some to help manage inflammatory-based illnesses like arthritis. Suppliers can’t make any medical claims for CBD, which makes promoting the stuff a tricky business for people like Tim Henley, Healthy Hemp’s UK Business Development Executive. Henley, however, clearly believes in his product range – which includes oils, seeds, tinctures and cosmetics – and the wider market. This, he said, is currently worth £1bn and will more than double in 2020, with uptake in the next generation, millennials, particularly high. No pun intended.

Zac Miller, TOMRA UK’s Senior Account Manager laid out what he hoped was “a very strong business case” for RVMs. Citing the public consultation, he said three-quarters of customers want to recycle, and warned retailers that the cost of not having a good DRS solution in-store would be £1,150 per year for every customer who went elsewhere with their drinks containers. He said the cost of an RVM had to be balanced against the costs of manual take-back, which included staff and operational costs, a cost in space and the cost of wrongly paying out deposits on items not in the scheme. Miller also pointed out that DRS was an upselling opportunity, and that the vouchers dispensed by machines, as well as their touchscreens were a great way to engage with consumers.