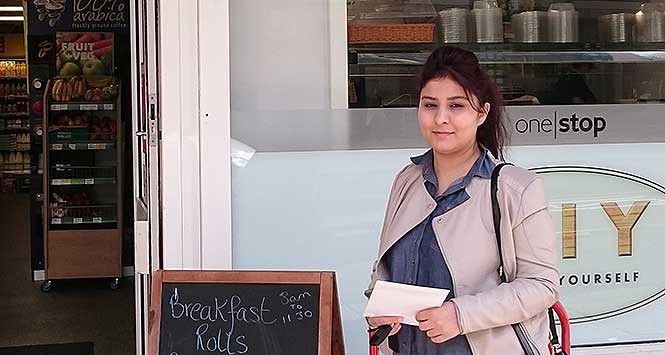 The winner of this year’s SLR Rewards Food To Go award was Glasgow One-Stop retailer Sam Ali for her stunning store-within-a-store concept – and she picked up a £500 Amazon voucher for her efforts.

Food to go is one of the fastest growing and most important categories in local retailing with many great concepts out there as retailers strive to make the most of this exciting opportunity. One such retailer is Sam Ali who owns a One-Stop store in George Street in Glasgow.

“The win meant a lot to me,” says Sam. “We had just opened up so it was a real morale boost for the shop because we’ve worked hard to get everything up and running and looking good. It was one thing to have people come in and be really enthusiastic about it, but to actually win an award was such an honour.”

Sam says the reaction from customers has been fantastic, which is great news. “We have the award displayed up behind the counter and we’ve had a lot of people noticing and congratulating us,” she says. “There’s a lot of local clientele here and we get the same people coming in day-in day-out which is really satisfying because it shows we’re doing something right, and they all seem to think the award is well deserved. We’ve also had quite a few of our competitors coming in as well to see what we’ve done right, presumably so they can try and copy us, which is flattering.”

As for the prize, Sam intends to put her £500 worth of Amazon vouchers towards a new Apple Macbook. She says: “I’ve been wanting to buy one for a while and have just been waiting for an excuse!”

Tags:one stopSam AliSLR Rewards
previous article
Rita Ora. That is all.
next article
Test your knowledge of this week’s retail news!