Borders on track for growth 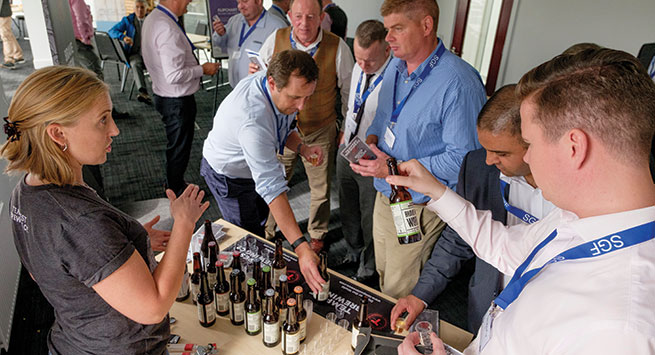 The SGF Annual Study Tour saw over 50 retailers, wholesalers and suppliers try out the new Borders rail link and discover how it is helping to open the region up for inward investment and tourism.

The Scottish Grocers’ Federation kept up its recent track record of building creative events with a fascinating study tour to the Scottish Borders, making timely use of the new Borders Railway. More than 50 retailers, wholesalers and suppliers boarded the train south from Edinburgh on the very day that marked the first anniversary of the opening of the rail link.

The delegates were treated to series of presentations and site visits that gave them a rapid fire but highly informative insight into how the rail link is beginning to open to the Borders up to increased investment and tourism – all of which is great for the area’s local retailers.

Supported by Abellio ScotRail, the event was hosted at the impressive new Galashiels Interchange building and saw a varied set of speakers from the local area, including local Council members, local retailers and local producers.

SGF Chief Executive Pete Cheema welcomed the audience, saying: “In recent times we’ve tried hard to make our events more special and a little out of the ordinary, so we are delighted to take this opportunity to get out of the Central Belt, but not just for the sake of it. We’re here to look at the opportunities for economic development, and how the retail sector can harness infrastructure improvements and changed perspectives.”

Sandy Bell, Executive Member for Economic Development on Scottish Borders Council and a passionate ambassador for the region, was first to welcome study tour delegates to the “accessible and unspoilt” region.

Councillor Bell pointed out that despite being the fourth largest local authority area in Scotland, the population of the Borders is only 114,000. In common with other rural areas, individual earnings remain below national averages but they are rising, and the region enjoys a slightly higher than average level of employment. Consequently, the predominance of smaller towns and villages makes the Borders an area that relies heavily on its network of community-based convenience stores.

Bell also made it clear that the fantastic success of the Borders Railway has brought a welcome boost to trade in the area. The immediate effect has been an influx of tourists, benefitting all local businesses – but the full effects of the new rail link clearly won’t be felt for some time to come.

Retailers Richard Garrie and Angus Towers of Tweed Bank Stores in Galashiels also took to the floor to discuss the challenges of running convenience stores and forecourts in the region. A well-established business, the store has had to face many changes over the years but has survived and thrived by embedding itself as the heart of the local community.

The railway may be bringing new money and new faces, but the area still has some stiff challenges, a fact recognised by all of the speakers on the day.

Hawick Spar retailer Katheryn McCusker, for instance, provided an update on the latest development in her on-going battle with the discounters and openly admitted that she and her husband have had to accept a very significant fall in revenue over the last couple of years as the major multiples and discounters have descended on the region.

On the whole, it was a day filled with positivity and optimism, an attitude personified by speaker Annika Meiklejohn, a Kiwi who’s made the Borders her home and who proved a very popular speaker, not least for inviting delegates to sample the wares of her Tempest Brewery. With her brewer husband, Anna recently relocated the business from Kelso to much bigger premises in Tweedbank to allow her to cope with the rocketing demand for her award-winning beers, including orders direct from retailers.

Likewise, Phil Prentice, CEO of Scotland’s Towns Partnership, pointed out that there are high quality and niche producers throughout the region, working with dedicated retailers to help keep alive the commercial heart of Borders towns and villages.

He said the emphasis has shifted to a ‘town centre first’ approach, and resources are available, such as an online toolkit, to foster economic development in town centres. He cited examples including Alloa, another community benefiting from a recent rail project, and Kilwinning, which has seen a successful transformation of the town centre with the cooperation and effort of local retailers. “Help is available in terms of events, research, consultation, and funding ideas,” he said, and noted three supplements produced with The Herald newspaper, promoting town centre regeneration.

With the presentations done and dusted, the delegation enjoyed lunch supplied by local food firm Born In The Borders, before heading off on a site visit to the impressive Co-op forecourt and c-store at Earlston.

Rounding off the day, Pete Cheema reiterated that the new Borders Railway link provides great opportunities for economic development. “Just look at the way the economy of the Borders is changing,” he said. “The economic status of the Borders can work in favour of businesses seeking to establish and thrive in the region. The distinctive Borders sense of identity plays a significant role in the day to day choices made by shoppers, which retailers are well placed to exploit.”