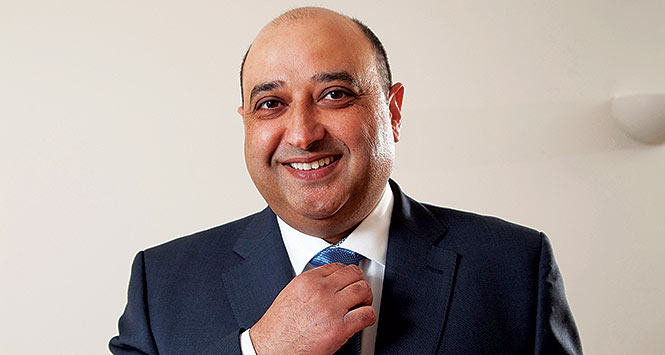 Retailers have relied on the SGF more than ever in the last year and the Federation has delivered in style on behalf of members, says Chief Executive Pete Cheema.

“What a strange year this been,” muses Scottish Grocers’ Federation (SGF) Chief Executive Pete Cheema as he reflects on one of the most challenging years in anyone’s living memory. “Covid-19 forced retailers to bring about dramatic changes to how they operated their businesses, in every sense, but do you know what, they did more than just managed, they excelled – and as a sector we should be proud of our response to the needs of our communities.

“Our ability to adapt our business models and grasp some of the digital and delivery service opportunities so rapidly has been nothing short of inspirational.”

Cheema also believes that “innovation and social conscience have been borne out of the crisis”, a view that’s hard to argue with.

But it’s not just retailers that have faced a tough but ultimately positive year. SGF has faced its own series of challenges with its entire events calendar wiped out and, along with it, the chance to catch up face-to-face with the trade. “Not being able to hold any events has been really challenging because bringing the trade together, sharing learnings and helping keep us all up to date on the latest developments is a big part of what SGF is all about,” says Cheema. “But that hasn’t stopped us ploughing ahead and I’m delighted to report that membership continues to grow with Applegreen among the latest to join as members.”

This year has also been a successful one on the lobbying front for SGF, as Cheema explains: “With the Deposit Return Scheme (DRS) on its way, we are delighted to have played a major role in ensuring that Reverse Vending Machines are exempt from both Business Rates and planning permission, and we have ensured that retailers can be exempt from the DRS. We have also formally agreed to become a DRS Scheme Administrator member which will allow us to effectively represent the interests of our members around this game-changing initiative.

“More recently, it has been hugely satisfying to see Daniel Johnson’s Shopworker Protection Bill successfully make its way through Holyood and we are proud of the vital role that SGF played in helping bring that Bill forward. We expect to see it clear the final hurdle, possibly as early as this month, but more likely in early 2021 and then we can wait for Royal Assent so that it can become legislation.

“We have also recently announced an exciting £100,000 Go Local pilot project, funded by the Scottish Government and led by SGF, that will help increase the range of Scottish products stocked in Scottish convenience stores. This demonstrates clearly the trust that the Scottish Government has in SGF and our ability to deliver real, positive change that benefits retailers, producers and consumers alike.”

The good work doesn’t stop there, however, as SGF already has a number of other projects in the pipeline to support members and the wider industry. “Tying in with Daniel Johnson’s Bill, we will be launching an ambitious new programme in early 2021 in partnership with Crimestoppers that will work directly with both consumers and retailers, educating both about what the shop workers protection laws will mean. “We expect to see a major behavioural change in consumers after the Bill becomes law as shoppers begin to understand the consequences of abusing shop workers in any shape or form.”

Looking further ahead, Cheema predicts a continued shift to digital in the sector, particularly around home delivery. He concludes: “Our sector has consistently and repeatedly shown the way forward and we should never be afraid to try something different, to be different and to create a USP.

“There are very positive things we can build on: we now have 30% of the grocery sector. We employ more people in our sector than we have done in the last decade, more people want to enter our sector than ever before, and we are perceived to the ‘fourth emergency service’.  Things can only get better.”