History made as Scottish Shop Workers Bill is passed 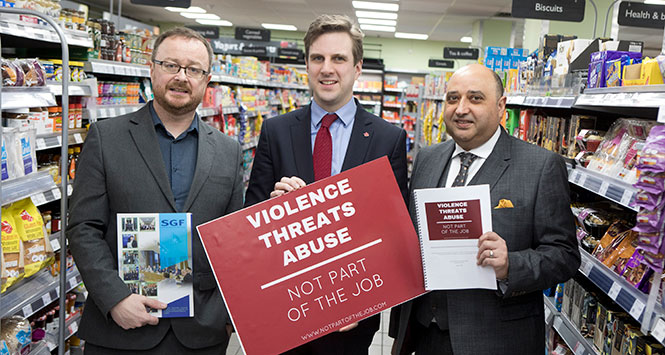 Daniel Johnson MSP’s game-changing Protection of Workers Bill was formally passed last month and will now become law later in the year. SLR secured an exclusive interview with him.

History was made last month – and it’s not a cliché we use lightly – as Daniel Johnson MSP’s Protection of Workers (Retail and Age-restricted Goods and Services) (Scotland) Bill was voted through the Scottish Parliament at Stage 3, clearing the way for the Bill to become law in Scotland later this year.

This represents a massively important moment for Johnson, the Labour MSP for Edinburgh Southern, as it means the Bill will be submitted for Royal Assent in the coming weeks – required for it to become an Act of the Scottish Parliament.

This will create a new statutory offence of assaulting, threatening or abusing a retail worker and will provide further legal protections when the worker is carrying out their statutory duties such as age-restricted sales.

The Week In Retail was granted an exclusive interview with Johnson yesterday just a couple of hours before the vote was due to take place at Holyrood and Johnson would take his place as a true champion of the local retailing sector.

Daniel, you must be very pleased?

I have to say I am absolutely delighted to see my Bill pass all the legislative hurdles to become law and give retail workers the proper protection they need. For too long, violence and abuse were seen as part of the job for shopworkers but, having worked with the Scottish Grocers’ Federation and other stakeholders across the country these past years, we have all challenged that assumption and provided workers with the protection of the law they deserve.

How did the idea for the Bill come about?

Believe it or not, the concept for the Bill was first discussed way back in 2016, before I had even been elected as an MSP. SGF and shopworkers’ trade union Usdaw both supported the idea of a Bill that would offer enhanced legal protection to shop workers and SGF asked whether I would back a Bill of this nature, should I be elected. It was such an important issue that I decided not just to back the Bill but also to sponsor it. Indeed, it was one of the first things I did after being elected – so it’s enormously pleasing to see the Bill clear the final hurdle.

And you are a former retailer yourself?

Yes, that’s true. I ran a gifting and greetings card business (Paper Tiger in Edinburgh), rather than convenience stores, but that gave me plenty of insight into abuse of shopworkers and the sorts of challenges that retailers face every day. So the Bill was something that came from personal experience.

Was it a difficult process, getting the Bill through?

It was long and it was very challenging, yes. The Scottish Government initially took a very sceptical view of the retailing industry and it took a lot of work to turn that around. At the end of the day, however, over quarter of a million people work in the retailing industry in Scotland and you can’t ignore an industry of that size, no matter how sceptical you are.

Did coronavirus have an impact?

It certainly impacted the speed with which the Bill passed through the Scottish Parliament, but the pandemic also helped reinforce the need for the new law because, tragically, incidences of in-store abuse of retail workers grew during the last year. I think the pandemic also served to help people understand the vital role that retailers in general, and local retailers in particular, play within the communities they serve across Scotland.

How important could this new law prove to be?

It won’t solve all of the industry’s huge problems around in-store abuse and violence, but it is a huge step forwards for the industry. Making it a statutory offence to assault, threaten or abuse a retail worker sends out a clear message and should help curb a lot of the abuse and violence that is currently commonplace in the retail sector. Even just siting a new legal notice at the till point will help retailers make sure that customers are aware of the serious consequences of their actions. In a sense, however, the Bill becoming law is only the beginning of a new set of challenges for the retail sector. We have a lot of work to do in order to communicate the new law both to retailers and to consumers.

When do you expect the new law to be enacted?

Typically, Royal Assent would be given within two to three months and the Bill become law around six months after being given Royal Assent. So we’re basically looking at the back end of this year.

Clearly, we will be looking for enactment and enforcement of the law in retail outlets across Scotland, and the enforcement point is particularly critical as we do not want retailers themselves to be left to police the new law. We also need the Scottish Government to stop passing laws which involve shop workers being forced to effectively enforce the law on the cheap. There are already too many examples of this type of legislation where retail workers are expected to police the law in and around stores. But these are all challenges I relish, and I look forward to promoting this change in the law with retailers and keeping our hard working retail colleagues safe.

“We are delighted that the Protection of Workers Bill has successfully passed Stage 3 of the Parliamentary process. SGF has worked with Daniel Johnson MSP since 2016 to call for additional protections for shop workers and has been a committed supporter of his Bill. At the SGF hustings event in Edinburgh in April 2016, we first floated the idea of giving front line retail staff similar legal protection as that given to emergency workers. The idea received strong support from senior politicians who took part in the event including Murdo Fraser (Conservatives) and Deputy First Minister John Swinney (SNP) but Daniel Johnson said that not only would he support it but, as a former retailer, he would sponsor it – and he has been true to his word.

“For SGF, 19th January 2021 was an historical day, to have overseen a bill from conception to proceeding for Royal Assent is nothing short of a dream. It has been a magnificent achievement, helped originally by Rory McPherson and then Michael McDougall from TLT in writing the original Bill and making the necessary amendments and then passing it over to Daniel Johnson, who has handled it magnificently.

“Once the Bill receives Royal Assent we will at last have key protections in place for shop workers who will benefit from a safer in-store environment and will also provide them with confidence when carrying out their work. The vote represents a key step-change in terms of Scotland’s approach to retail crime.

“Throughout the current pandemic convenience retailers and their staff have been working extended hours to ensure that the communities which they serve have access to the key groceries and services they need. It is fitting that the Scottish parliament has taken the decision to afford retail workers the protection they deserve under the law.”

A safer working environment – and not before time