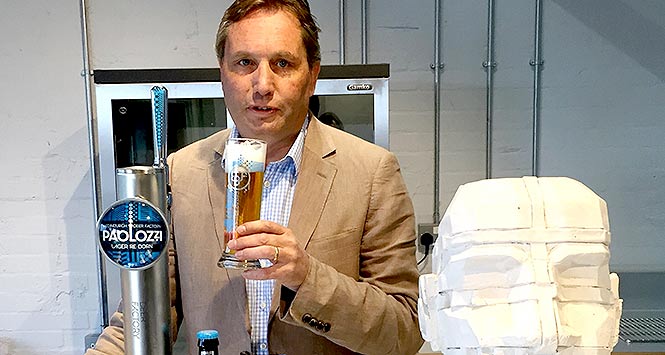 John Dunsmore (pictured), ex-CEO of Scottish & Newcastle and C&C Group, has founded a new craft brewery in his home city of Edinburgh.

Housed in a converted industrial unit in the west of the city, Edinburgh Beer Factory is an unashamedly modern, urban microbrewery where Dunsmore’s wife Lynne and daughter Kirsty are also part of the team.

The creativity and agility of smaller companies that he’s recently worked with have spurred Dunsmore to create something from scratch. “Innovation can happen in big companies, but it happens despite being big, not because of it,” he said. “With a family-owned business there’s no compromise driven by external shareholder pressure; you can make the right decisions based on strong values and a long term perspective.”

Edinburgh Beer Factory draws inspiration from the world of Pop Art, and its launch product is a tribute to the movement’s founder, Scots-Italian Eduardo Paolozzi.

‘Paolozzi’ is a 5.2% lager based on a historic Munich style but created with contemporary Italian brewing technology, resulting in “an exceptionally refined beer with a perfect bitter-sweet balance and fabulously sparkling appearance”. Paolozzi’s artwork ‘Illumination and the Eye’ is displayed on the bottle and fount, and EBF will be showcasing other artworks at the brewery.

The beer is endorsed by the Paolozzi Foundation, and the brewery will pay a charitable donation for every bottle and pint sold to promote Paolozzi’s work and ideas to the general public.

Paolozzi lager launches in Edinburgh and Glasgow this month, with plans to expand across the UK over 2016. Edinburgh Beer Factory will open to the public in time for summer 2016.