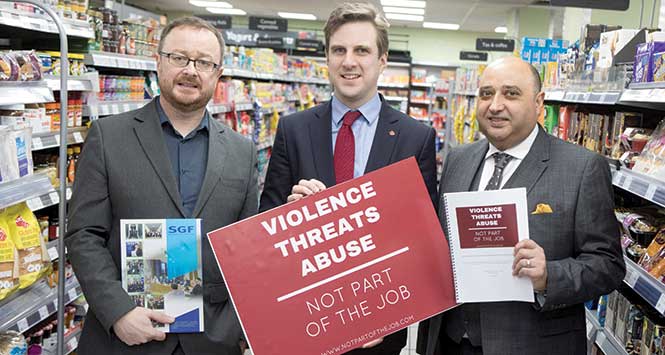 MSP Daniel Johnson has launched a proposal for new legislation to protect retail staff from violence while at work.

The proposed Protection of Workers Bill is now open for public consultation.

The bill would create new offences regarding shopworkers and others who are involved in the sale and supply of age-restricted goods and services.

Johnson – the Scottish Labour Party frontbench spokesperson on Justice – had support from shop workers’ union Usdaw and the Scottish Grocers Federation in the preparation of the consultation. It marks the first stage of a parliamentary process which could see a draft bill being voted on by MSPs towards the end of 2018.

A 2017 survey commissioned by Under Age Sales, Usdaw and the NFRN – which has also welcomed the bill – revealed that 50% of store workers in Scotland encounter verbal or physical abuse at least once a year due to asking customers for ID when purchasing age-restricted products.

Johnson, pictured at the launch with SGF’s John Lee and Pete Cheema, said: “The issue of violence and abuse against workers continues to grow, and many workers have told me that they now see it as just part of the job. My bill aims to provide legislative solutions, by creating new offences for those who assault or abuse workers.

“I would encourage anyone who can to contribute to the consultation at notpartofthejob.com and have their say on how we can protect workers.”

Pete Cheema, SGF Chief Executive, said the proposal was a once-in-generation opportunity to make shops in Scotland safer for staff, customers and communities. “This is something everyone in Scotland should support. We would urge all our members and key stakeholders to respond positively to it.”

The consultation runs for 12 weeks and the responses will be analysed by the Scottish Parliament and used to inform a draft Bill.