Is that light we see at the end of the tunnel? 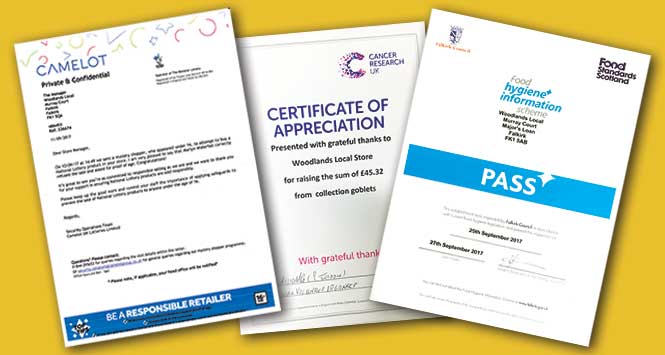 After another tough period at Woodlands Local with major staffing issues, we are finally back on track and have seen some very encouraging signs over the last month with increases in footfall and sales, as well as major progress in other areas.

There are those months in life when you really wonder why you ever got into retail in the first place – and then, every once in a while, there are months when everything seems to be going your way. They don’t happen all that often, it has to be said, but when they do it’s a wonderful feeling. Just when it seemed like we couldn’t buy a bit of good luck, we’ve had a month where we saw some long-term plans come together, we saw the team gel like never before and we received a few unexpected bits of good news into the bargain. Mind you, it’s not like it happened by accident. The team has been busting a gut recently to get Woodlands Local moving in the right direction and gathering some much-needed momentum. The harder you work, the luckier you get, and all that.

We’re certainly not getting ahead of ourselves and we know we have quite a few bumps in the road ahead of us but it somehow seems easier to find a plan for the tough times ahead when life is going a little smoother.

In terms of the big picture, we’ve seen increased footfall, basket spend and turnover in the last month which may or may not be down to factors outwith our control but we are convinced that all the work we’ve been doing has at least contributed to this undoubted progress. We’re not talking big leaps here – only increases of 5% to 10% or so, but it’s movement in the right direction, on top of a run of several months where the store has generally stabilised for the first time in perhaps 18 months. So it’s small shoots, but I can’t tell you how pleased we are to see them.

At the heart of this improvement has been much better and more controlled buying by our Manager Arlene. Our buying of standard stock has been much tighter and we’ve managed to clear out all of the excess from our various stock areas. This has obviously helped reduce outgoings as well as increase takings – with the added benefit of much tidier and clearer storage areas.

We’ve also improved our promotional buying, tending to go larger on lines we know we can sell in volume, rather than buying smaller quantities of a far wider range of promo lines. This also lets us make more of a ‘wow’ on the promotional ends as we are devoting entire shelves to single lines or groups of related lines. The impact on-shelf is better and that is translating in better sales of promoted items and virtually no stock left at the end of each promo period.

We still have occasional issues with stock availability in certain chilled lines, thanks mostly to a sort of ‘feast or famine’ approach that our customers take to buying some of the key lines. A good example is the stock we get from our local butchers which is exceptionally popular with our customers.

The problem is that, every few weeks, and for reasons we simply can’t fathom, sales of certain lines just go through the floor. We gradually increase the order each time to cope with increasing demand then boom, one week we end up with half a dozen steak pies left unsold. We mitigate that slightly by freezing them before they go out of date and then sell them via the hot food counter but it’s one of those problems that I don’t think we’ll ever solve completely. The steak pies can sell out in a single day or be left unsold after three days – and we simply can’t work out why.

We are also having some challenges agreeing on a settled chilled range, particularly now that Filshill’s trial period with Lomond has apparently ended. We must have tried 25 new chilled lines in the last few months, giving each one plenty of chance to bed in – but very, very few have stood the test of time. Our customers can be very choosy in what they’ll try, yet our commitment to an extended chilled range means we need to fill a large cabinet with stock that we know will sell solidly, and that’s proving troublesome.

We recruited two new staff last month and then spent most of the month training them in aspects of running the store, over and above the mandatory licensing and cooksafe training. It’s a time-consuming and complex process, particularly when we know that only around 50% of those that we start will still be there a month later. This recruitment phase was no different.

Of the two we started, one has shown himself enthusiastic, willing and great with customers while the other failed on pretty much all counts and has already been dismissed.

So we’re back looking for staff once more and we will need to begin the training and evaluation cycle once more, probably for another two staff as we will need holiday cover very soon with one staff member going on vacation and another absent for up to five weeks for an operation.

But we are taking heart from the fact that Danny, our successful new start, has the makings of a great member of the team and has fitted in well. As long as we’re making progress, we can keep our eyes on the prize.

September was a good month too for some unexpected reasons. Firstly, we had an unannounced underage test purchase from Camelot and I’m delighted to say that we passed with flying colours.

Top marks to Marlyn for refusing the sale and doing us proud on that front!

Then we received a nice Certificate of Appreciation from Cancer Research UK thanking us and, more importantly, our customers, for having donated £45.32 to the charity via the box on the counter by the till. Always nice, although it would be even nicer if the various charities we raise money for actually collected the tins more often!

We literally have seven completely full tins that have been sitting awaiting collection for months, despite numerous phone calls and emails to them.

Finally, and possibly most importantly, we also received our latest Food Hygiene Certificate from Falkirk Council. Our EHO had visited a month previously and had highlighted some minor areas needing work. Arlene oversaw these improvements and ensured we passed. Great work by the entire team for that effort and it’s hopefully a sign of things to come.