Getting ready to give Aldi laldy! 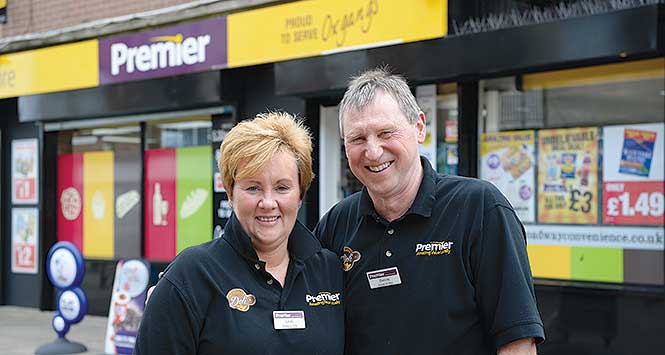 Edinburgh Premier retailers Dennis and Linda Williams have been putting the finishing touches to their store as they prepared to do battle with German discounting giant Aldi when the chain moves in next door in January.

High profile Edinburgh Premier retailers Dennis and Linda Williams have had plenty of time to come to terms with the idea that Aldi is moving in almost literally next door, but with the opening of the new store having been delayed on several occasions, the couple have been putting the time to good use, crafting a detailed strategy document they hope will secure the long-term future of their business.

“We learned about this a long time ago so we’ve had time to lick our wounds then pick ourselves up and get busy putting together a strategy we think will help make sure we have a business long into the future,” says Dennis. An eternal optimist, as anyone who knows him will be aware, Dennis’s positivity and contagious optimism will go a long way towards making sure that his vision of a sustainable business will play out in reality – but he knows that the next few months will be anxious ones for him and Linda.

“I’m a born optimist,” he says, “so I’ve always thought we can get through this but don’t get me wrong, we’re worried about it. We’ve had plenty of sleepless nights, but all we can do is try to remain positive and do all that we can before D-Day.”

D-Day now looks like it will be in January next year, after the opening was once more pushed back a few months. This at least gives the store one more Christmas to cash in on and hopefully build up some reserves before Aldi opens its doors.

But as much as Dennis is a glass-half-full kind of guy, he’s been in retail long enough to know that it will take more than a positive attitude to get the store through what promises to be a tumultuous period.

“I’ve been in retail for 30 years,” he says. “We’ve been serving this same community faithfully and loyally for over three decades so I just hope that some of that loyalty is repaid by our customers when we really need it. But Linda and I are long enough in the tooth to know that we needed more than just passion and positivity – we realised a long time ago we needed a concrete plan of action for how we try to cope with a discounter moving in next door.” 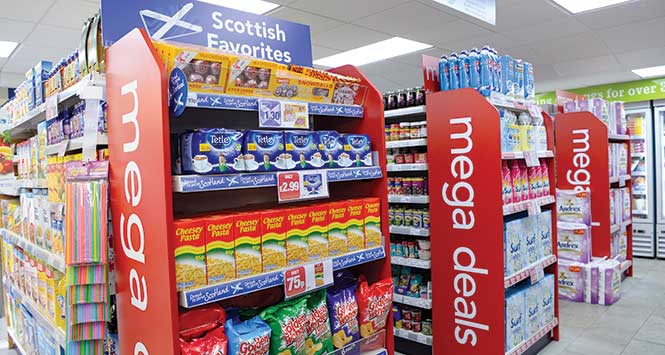 That plan of action centred around a very simple yet very logical goal: bringing in as many products and services to the store that the local community wouldn’t be able to find in Aldi.

Linda explains: “We knew immediately that we couldn’t hope to compete with Aldi head on in the areas where they do things well, and we accept completely that Aldi does a lot of things well. They haven’t been this successful for nothing. But we knew that there were quite a lot of chinks in their armour if you looked hard enough for them – and believe me, we looked as hard as anyone has.”

The couple soon found that they were not alone in the battle however, with Booker and their Premier fascia brand taking an exceptionally active interest in developments.

“When this whole issue first arose, one of the first people to contact us was Booker CEO Charles Wilson and that gave us so much inspiration,” says Dennis. “It says so much about the company that a man like Charles, with all the responsibilities he has, takes the time to get in touch personally to offer some ideas and advice and just general support.”

It soon became clear that this was no token gesture with Wilson personally visiting the store, followed by visits from Booker Retail Managing Director Steve Fox and Premier Brand Director Martyn Parkinson.

Dennis points out that the ‘find as many USPs as you can’ strategy actually came from a hand-written note from Wilson, who told them on his visit to the store that the key was to offer shoppers things Aldi couldn’t give them. 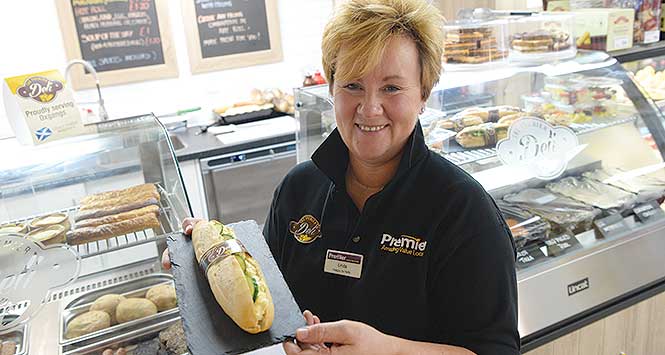 The result of that strategy and countless hours of work, along with some very considerable investment, is a store that is virtually unrecognisable from just a couple of years ago. The final piece in the jigsaw – the Premier Deli – was fitted only last month at a cost of over £10,000 and allows the store to offer an extensive range of hot and cold foods, cakes, pastries, pies, filled rolls, sandwiches and more.

“We’re very proud of the new Deli,” explains Linda. “It’s something Aldi can’t touch us on and we’ll have a good few months to bed it in and get our customers used to it before Aldi arrives. Only a few weeks in the Deli has already added hundreds of pounds of extra revenue per week onto the takings and that’s only set to grow.”

Also core to the strategy was a focus on big brands at great value, something that the might of Premier is able to provide in spades. “We know Aldi is own-label driven but we believe many of our shoppers want to buy big brands, especially in key categories like confectionery, crisps, soft drinks, spirits and so on,” says Dennis. “So if we can focus on delivering those big brands at great value prices we think we can compete. The Premier promotional programme is exceptional so we’ll just have to work harder to communicate the great value on global brands that we offer here in our store.”

With that in mind, the store has done away with its tobacco gantry and replaced it with an extended range of spirits in modern black shelving, making what the couple believe is much better use of prime sales space. A new vaping range has also been added to complement the existing tobacco range, once more offering a USP or two over Aldi, while the Lottery terminal also provides reasons to visit on at least four days a week.

Local and national sourcing is to the fore with locally-sourced produce, bakery lines, butchery and more. There’s even a new Scottish brands promotional end to appeal to the patriot in every customer.

Service with a smile

And all of that is before we get to the real point of difference: customer service. “We all know what the customer service is like in Aldi, so we just hope that the new store keeps up that trend,” laughs Linda. “Having been here for decades, we know every single customer personally and have a great rapport with them. We go above and beyond for our shoppers every day and we believe that this will ensure that we still have a role to play for them long into the future.”

There’s no question that an uncertain future lies ahead for Dennis and Linda but they can reasonably say that they have done all in their power to prepare as best they can – and retailers across Scotland and the rest of the UK will undoubtedly be keeping one eye on how the situation unfolds because if Broadway Convenience Store can survive the storm, the template they used will be hugely valuable for every other retailer who finds themselves in a similar scenario in the future.

There’s also little question that retailers across the UK, regardless of affiliation, will be wishing Dennis and Linda the very best of luck in the battle they face.

“We’ve had nothing but good luck wishes from everyone we meet in the industry and that means a lot to us,” concludes Dennis. “We’re under no illusions – this will be a huge challenge for us, but we’re as ready as we can be and we’re going to put everything we have into this fight.”

For the sake of the entire local retailing industry, we wish you the very best of luck and the greatest success. Now go and give Aldi laldy.