All eyes on 2020 for Barr Soft Drinks 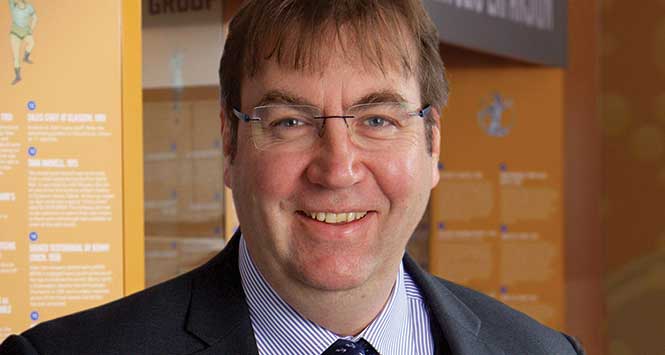 It was always going to be impossible to replicate the stellar success of 2018 with its endless sunshine and countless major events, but AG Barr Commercial Director Jonathan Kemp still finds plenty of positives in this year’s performance and remains upbeat about 2020.

One of the most enjoyable and refreshing things about interviewing AG Barr Commercial Director Jonathan Kemp over the years is that he never ducks questions, no matter how awkward the answer is going to be. In response to the loaded question “How has the year been?” he responds bluntly: “It hasn’t been a great year for any of us, has it? We’ve seen year-on-year soft drink sales in independent stores down an average of 11% and there have been individual weeks where they’ve been down 75%. That’s not great.”

Of course, it was never destined to be a great year, certainly not when you compare it to last year, as all businesses – including AG Barr – are inevitably forced to do. A seemingly endless summer with record-breaking temperatures coupled with a seemingly endless stream of major events culminated in nothing less than a phenomenal year for soft drinks.

“It was always going to be a near impossible task to replicate the success of 2018 so I think it’s important we all put 2019’s performance in some kind of perspective,” says Kemp. “It’s obviously a challenge we face internally too because we’re attempting to sell into a much smaller market with much softer demand so that’s naturally going to have consequences.”

Kemp is also keen to highlight how the 2018 figures themselves were complicated by the much-publicised CO2 shortages. He comments: “A lot of soft drinks companies were affected by that in all sorts of ways. It led to lots of products simply not being available in wholesale and, as a consequence, in retail. What that meant was that both retailers and consumers were just buying what was available, rather than what they actually wanted and that had an impact on everyone’s sales figures last year.”

The point being that meaningfully comparing this year’s sales with last year’s is not as straightforward a task as it might appear.

As it happened, AG Barr had already learned from a previous CO2 problem and had contingency plans in place which allowed it to capitalise in 2018 as other suppliers ran out.

Kemp’s ultimate and very practical theory is that it’s much more sensible to compare 2019’s performance with 2017’s – which was a much more typical year – rather than comparing it with the 2018 outlier.

“If we compare our performance as a company with 2017 I think we get a much more sensible, balanced platform for analysing how this year’s been,” suggests Kemp. “Irn-Bru, for instance, is in growth when compared to 2017 so for me that’s a positive.

“Let’s face it, we’ve been around since 1875 and we’ve always taken a long-term view about the growth and the development of the company,” he says. “Even being a PLC these days, I believe our shareholders understand that 2018 was a spectacular year that was impossible to repeat but they see that our long-term strategy is sound and as a brand-based business we are in a very good position moving forward.”

“We are constantly trying to see what we can do with the Irn-Bru brand because it’s such an iconic part of the Scottish cultural tapestry,” he explains. “Everything that says Irn-Bru on the front is based around the same Irn-Bru essence of 32 flavours and that’s been consistent since day one.”

Speaking of day one, the imminent launch of Irn-Bru 1901 has already caused a media furore, although Kemp is curiously coy about the longer-term prospects for what looks certain to be a smash hit when it goes into wholesale this month.

“We produced around five million bottles, roughly one bottle for every person in Scotland, so we’ll just see how it goes in the market before we make any decisions,” he says, somewhat cryptically. With retailers, wholesalers and symbol groups pulling every favour in the book to get as much of it as possible for themselves, it seems impossible that the launch won’t be another massive success, and another stroke of marketing genius from a brand that has more than its fair share of often irreverent smash hits in the past.

Irn-Bru 1901 actually contains even more sugar than the most recent ‘original’ Irn-Bru, the one before the reformulation and sugar-reduction that caused so much consternation across Scotland. The 1901 version doesn’t contain caffeine but does contain a special unpronounceable natural ingredient, faithful to the original recipe, which produces a smooth and frothy head.

“We call it the ‘new and unimproved’ Irn-Bru and it was made to an authentic 1901 recipe from a handwritten book stored in our archives for over 100 years,” says Kemp. “Honestly, you’ve never tasted anything like it.”

The 1901 version will sell for an eyebrow-raising £2 a bottle and will only be available in old school Irn-Bru glass bottles. “The price point reflects the fact that it will attract the Soft Drinks Industry Levy and the fact that it is more expensive to produce, although it will deliver around double the margin for retailers at about 50p a bottle,” highlights Kemp.

Of course, it wouldn’t be Christmas without a quirky bit of festive NPD from AG Barr and this year it’s Irn-Bru Crimbo juice, a limited edition ‘Spiced Ginger’ product – a pun that might be lost on non-Scots.

Another interesting bit of NPD sees the company launch new Rockstar XD Power, something Kemp is particularly excited about. “It’s an interesting launch for us because it takes us into a new space. It’s a caffeinated drink with no sugar but with BCAAs (branched chain amino acids) which is aimed at customers who take their sports and training seriously. We know that over 60% of men aged 16-34 use supplements of sorts and we believe that they will embrace this product – and it will deliver incremental category growth for retailers.”

As for the company’s other ranges like Bundaberg, Snapple, San Benedetto and Rubicon, Kemp admits it’s been a bit of a mixed bag. “Rubicon Spring in particular is doing really well in Scotland although the sparkling Rubicon is flat and the still variant is in decline,” he admits. “We are addressing that with a major relaunch shortly.”

So 2019 wasn’t such a bad year after all then when taken in true context and there’s certainly plenty to be optimistic about for 2020, then?

“I’m always optimistic,” laughs Kemp. “We’ve got great brands, great products and great plans for the future and we’re building from a massively strong base. Roll on 2020!”

Tags:Barr Soft Drinksjonathan kemp
previous article
All I want for Christmas is…
next article
Rustlers rolls out veggie burger